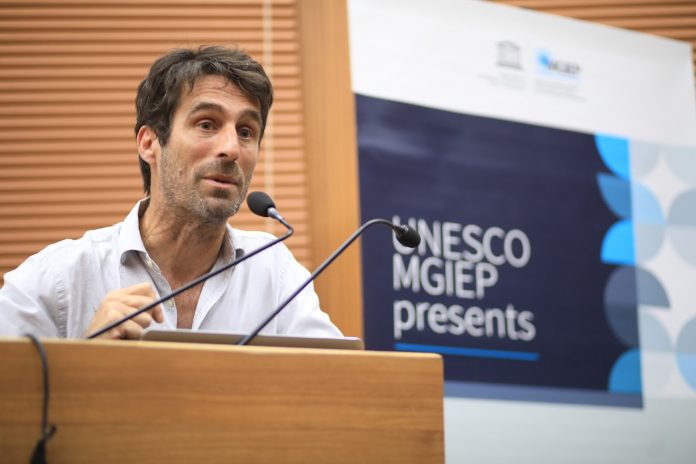 Like it is said there are 2 sides of the coin similarly the negative side is that WHO stated gaming as an addiction but on the other hand positive side is that it can be used as a great tool for learning.

Video games have long been considered a bad influence on children, triggering aggressive behavior and exposure to violence. But if designed right, video games have the potential to become a great tool for learning. “The combination of active learning pedagogies and video games makes it a powerful mix,” says Zigor Hernandorena Juarros, Senior Project Manager – Fun Learning Department, Ubisoft.

In his lecture, titled ‘Learn to play and play to learn, the role of gaming in education’, Zigor explained how digital games can be designed to reward players, acknowledge practice and incremental progress, thus making learning more effective through peer-collaboration and a project-based approach.

Zigor Juarros, emphasised the idea of making video games available for all regardless their economic or health status, “Not everybody can afford a console or the video games, ideally they should be free and the idea is to make personal computers or webpage friendly games, while maintaining the triple-A quality and graphics,” he said.

Zigor explained how digital games can be designed to reward players, acknowledge practice and incremental progress, thus making learning more effective through peer-collaboration and a project-based approach. Zigor also underlined the need to develop suitable content for games to make them more relevant to 21st-century learners. He expressed “Regular games (not meant for learning) very effectively teach the player everything they need in order to play the game. The same games can serve as effective tools for learning skills for the 21st century if used in the classroom as supplementary material.”

The games for learning project at UNESCO MGIEP focuses on building tools and research on using games as a pedagogy to building 21st-century skills and socio-emotional skills.” Further, he invited participants to “make learning addictive.”

An estimated 2.5 billion people around the world play video games in some form. Therefore, it is not surprising to see that educators and developers are trying so hard to make digital games for schools.