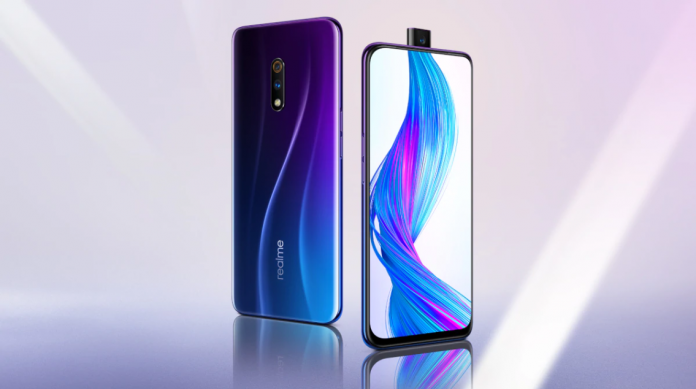 After a variety of leaks revealed by Realme and creating a buzz among the netizens, Realme X is now officially launched. Realme X is the company’s first “pop-up” selfie camera phone. Realme X was launched at an event at the Dreamland Art Theater, Beijing.

This phone was released by Realme to bring more smartphone experience to the younger generation. “We eliminate the notch at Realme X to provide more experience for consumers, especially for young children,” said Derek Wang, Chief Product Officer of Realme. As mentioned above, Realme X is Realme’s first cellphone that has a 16-megapixel selfie camera with a pop-up model. The cellphone will pop up on the top side of the cellphone when the selfie camera is activated.

Realme X has a 6.5-inch screen without bangs with FHD Plus resolution. Realme X also has a bezel-less design with a frame around the screen that is quite thin, with a screen-to-body ratio that is claimed to reach 91.2 per cent. In terms of photography Realme X is equipped with two cameras on the back. Each camera has a 48 megapixel and 5-megapixel sensor, along with one LED flash module. The Realme X is powered by a Snapdragon 710 chip with up to 8 GB of RAM, and up to 128 GB of internal storage.