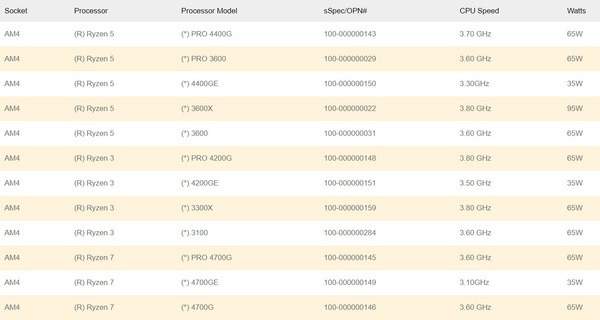 After the recent development around B550 and B520 chipset’s, AMD may be preparing refreshes for its Ryzen 7 3700X and Ryzen 7 3800X. Earlier this month we came across details about new company APUs several times. Now Twitter user Komachi Ensaka has shared a list of the new APU’s.

The list can be found on a product page of a B550 motherboard from Biostar, with the list of supported CPUs. Meanwhile, the new chips have been removed from the list, but names with corresponding clock speeds were listed. The previously leaked specifications correspond to these speeds and supposed names from which can be deduced what the specifications of the rest of the chips are.

The Pro chips are likely to be similar to the non-Pros, although the boost clock speed may be slightly lower. Most likely you will be able to overclock all chips again, with enough cooling you will probably get a nice speed gain.