A couple of years ago OnePlus came out with this interesting phrase: Flagship killer. It wasn’t new phrase but OnePlus was the first brand to apply it to its latest phone. The idea was that the OnePlus phones were so good that despite their relatively lower prices they were “flagship killers”. In other words, they were as good as a flagship phone from companies like Apple and Samsung. But are they still the Flagship killer.

One Plus has a bad history when it comes to rolling out updates to the users. OnePlus’s commitment was transparent: it had pledged to provide all OnePlus smartphones with regular updates over a 24 months period, starting from the first build of Oxygen OS. In reality, the OnePlus One received its final update in January 2016, adding up to only twelve months’ worth of support. Similarly, the OnePlus X has been neglected since November – also less than two years.

The flagship device lacks some Flagship features. The OnePlus Smartphones are quoted as “Flagship killer” but they lack features like waterproof and dust resistant ratings (IPX6 and IP68). The Slow motion of OnePlus 5T can only work at 1280 x 720 at 120 FPS. Sure that’s something tempting, but today’s common flagship can do Extra-Slow 240FPS at 1280 x720 or 1920×1080 at 120FPS.

When it comes to design, OnePlus 5 had similar design to that of iphone 7 Plus and OnePlus 5T has nothing changed except change in the location of Fingerprint sensor. 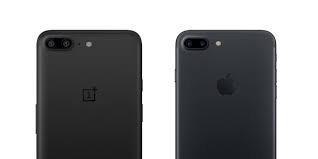 OnePlus cheats with Benchmark’s. Developers at XDA, who were handed a review unit, discovered that the OnePlus 5’s OS was tweaked specifically to boost performance in benchmarks. What makes it worse for the company is that it appears to have applied this hack specifically to review devices, which mostly includes most reviewers and bloggers who help form an initial opinion of the device.
While this attempts to imply that the company did not overclock the review units, it does not disprove the fact that the OnePlus 5 manipulated the benchmarks.

OnePlus 5 devices are suffering from a severe “jelly screen” effect and OnePlus claims this is normal.
When scrolling vertically, the image on the screen apparently contracts and expands, creating the “jelly” effect. It’s hard to describe without a visual, so this video by ‘Tech Net’ on Youtube should be exactly what we need:

Many speculations were being made about the cause of the jelly scrolling effect, with one prominent one being it could be a VSync issue, and the other being that the display has been installed upside down in the device.

Premium flagship owners need not bother as the OnePlus will not match or deliver anything better or close to a Galaxy S9 or an HTC U11, and it does not look any better either. Let’s clear this, the OnePlus smartphones are not a “flagship killer”. It’s simply a powerful smart-phone with great battery life, an old (that’s also upside-down) display and an average dual-camera.

Indeed, OnePlus did not see this coming. It built a smartphone using the same old formula, with updated hardware and software, but it missed the price bracket and the niche it created.

As a result, the OnePlus smart-phones have crossed the value-for-money mark and entered the premium flagship territory, which is volatile middle ground. When you’re spending ₹ 30,000 – 40,000, Why wouldn’t you spend just a little bit more and grab a true flagship instead of a wannabe one?