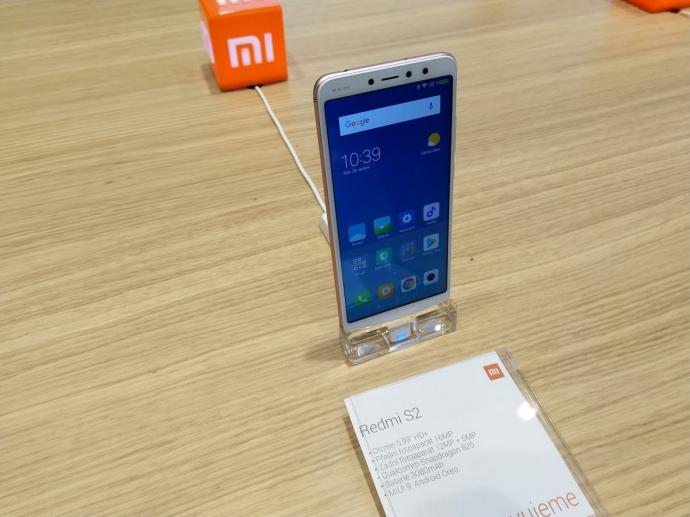 Xiaomi is ready to launch another budget smartphone, the Redmi S2. It’s expected to be launched in India and China in May. According to a previous report, the details of the smartphone were found on the firmware files of the device. Earlier reports also mention the Redmi S2 getting TENNAand 3C certifications in China.
Xiaomi hasn’t revealed a launch date of the device yet but there seems to be nothing hidden about the device anymore. Not only have live photos of the phone been published online, there is also a hands-on video of the device and a poster revealing the price.
The hands-on video is from Czech Republic websitedotekomanie.cz. The source says the phone is already on display at a Mi Store in the Czech Republic. So, it is safe to say Xiaomi has not only entered a new market in Europe but the Redmi S2 may even be a Europe-first device.
Since the phone is already available on display it explains how they were able to get a hands-on video. They were also able to confirm the specs.
The unit in the video is the gold variant. Other than the arrangement of the sensors on the front and the design of the antenna lines, this is similar to Redmi Note 5 Pro and Mi 6x (exclusively available in China)
The Redmi S2 has a 5.99-inch display with a 1440 x 720 resolution. It is powered by a Snapdragon 625 processor paired with 3GB of RAM and 32GB of storage.
The phone has dual rear cameras – 12MP + 5MP – and a 16MP sensor with its own LED flash in front for selfies. It also has a 3,080mAh battery and runs MIUI 9 based on Android Oreo. These specs place it firmly in the mid-range category.
We also saw the leaked firmware details in which the device was to be launched in India and China, but with the recent development the Redmi S2 will be making its way to the European Markets first.
With the recent developments, the Xiaomi Redmi S2 may be upon us much sooner than expected. This time Xiaomi will not only announce a new phone but it should also announce its entry into a new European market.
Redmi S2 will also be available in Vietnam. This is based on a picture from Vietnam (above) which lists the price of various phones including that of the unreleased Redmi S2.
The prices are in Vietnam Dong and the Redmi S2 has a VND 3,999,000 price tag. This roughly translates to $176 or ₹ 11,700 which costly and is in the same price segment of Redmi Note 5. But since we dont have the deatails about the memory and storage configuration of the device, we’ll have to wait till the official launch to give our verdict.