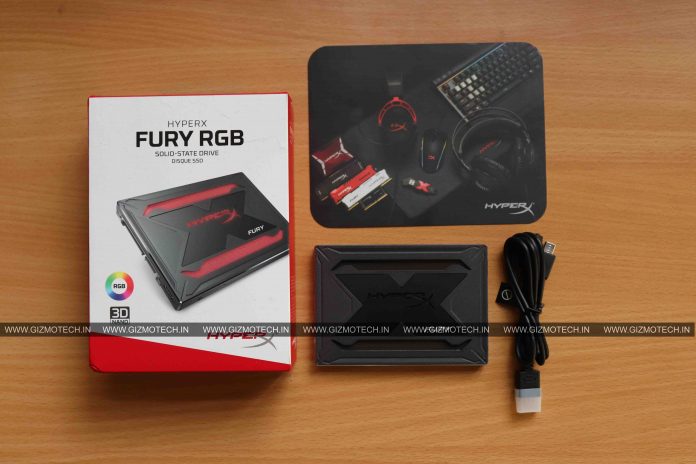 HyperX Fury RGB SSD is the latest addition of the HyperX to the RGB SSD market. Custom RGB lighting has become the trend of the past few years. It is embedded in motherboards, video cards, RAM strips, peripherals and now even drives. The HyperX Fury RGB is available in different versions with a capacity of 240, 480 and 960 GB. Connected via a traditional SATA interface. In our HyperX Fury RGB SSD Review, we will be reviewing the base variant of 240 GB.

The HyperX Fury RGB is already available in Indian stores and online markets.

The HyperX Fury RGB is Toshiba’s 64-layer 3D TLC NAND paired with Marvell’s 88SS1074 controller for increased reliability and efficiency, so they claim. All of that is contained within a bulky metal enclosure with dimensions of 100.14 × 69.85 × 9.5 mm. Measuring 9.5mm instead of the typical 7mm we generally see from today’s SSDs and weighs 165gm.

At one of the ends of the SSD there is a standard SATA connector for connecting power and interface cables. A Micro-USB connector is also located nearby, to which, if necessary, a complete adapter is connected.

The SSD can easily be configured with any software we used Gigabyte RGB Fusion and faced no difficulty in controlling the backlight few a few crashes from the RGB fusion itself.

The HyperX Fury RGB SSD was installed on the Gigabyte AB350 Gaming motherboard with an AMD Ryzen 5 2600, GTX 1050 and Adata XPG 16GB RAM.

We used CPUID to measure the SSD temperature. In our case we used the SSD in Antec DF 500 RGB Case with additional rear mounted Antec Prizm ARGB

We used the following software to test the performance of the drive:

*The test result were with the RGB Mode on(Colour Cycle). Using some other mode or turning off RGB may produce some different results.

Although these with the virtual benchmarks the HyperX Fury RGB yields some good result but when used for a longer duration the story changes the SSD reaches high temperature like in this case the temperature was so high the flash chip begins to bottleneck. The temperature was high above the operating temperature.

Although this scenario occurred when the SSD was used continuously for 3-4 hours. At this temperature when we benchmarked the SSD there comes another story. The SSD became too slow that there were frequent system crash and BSOD.

HyperX Fury RGB is an interesting SSD for modders, gamers and all those who want to shine their computer for the right price. The overpayment for backlighting is about INR 3,000-4,000 more compared to other budget solid-state drives of the same volume that do not have backlighting.

More and more solutions are appearing that can decorate a computer with RGB backlight. At the same time, the Fury RGB SSD shows standard speeds that do not stand out from other budget solutions and get heated up to a point where it become ridiculously slow. Separately, I note that the manufacturer gives a three-year warranty on HyperX Fury RGB. Alternatively, you can also consider  Team T-Force delta RGB SSD although the results are similar.