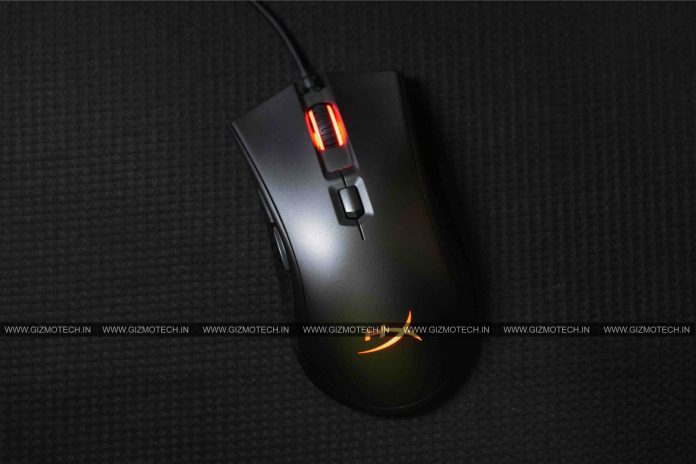 Pulsefire FPS Pro is equipped with 6 buttons: a pair of primary, a rubberized scroll wheel, a permission change key and a pair of side navigation keys. All buttons are quite hard and are pressed with a perceptible click. To connect to a PC using a soft cord in a fabric sheath, its length is 1.8 meters. The wire coating is smooth, it does not cling to the edges of the mat. From the ergonomic, the mouse is designed with right-hander kept in mind.

Initially, Pulsefire FPS Pro has three modes of operation: 800, 1600 and 3200 dpi. They are switched by pressing the button next to the wheel, and the transition is confirmed by the colours of the LED. In the proprietary utility, the number of modes can be increased to five, or, conversely, disable unnecessary ones.

The rest of the keys use not such advanced switches, but the load on them is much less. In total, the model has six buttons, and each can be programmed using the NGenuity utility. Swap the side and main, or assign to any macro (pre-recorded sequence of commands).

Professionals use floor mats to ensure perfect mouse glide. But different things happen – you need to be prepared for any situation. HyperX engineers have resolved this issue radically. If in the majority of similar models, small Teflon stickers serve the same purpose, here there are two large overlays. Together they occupy a good half of the entire bottom surface. So the mouse works great not only on expensive rugs but also on their cheaper counterparts, table surfaces or a piece of paper. The difference, of course, is, but not critical.

As for the games, everything is just fine. In general, taking into account the installed Pixart 3389 sensor and a very modest mass, the mouse is ideal for working in graphic editors. But for games, it is sharpened best, and here you already forget about all the nuances of software and other things, since in the game the mouse is simply deadly.

HyperX products come with proprietary software that reveals the full potential of the device – in this case, the NGenuity utility is the software form HyperX.

You can start customization with appearance. In the mouse, there are two areas of illumination – the wheel and the logo on the “back”. Both can glow in any colour from the RGB range. The nature of the glow, of course, is also available for editing: put at least a uniform glow, even a gradient play.

There is also a section for switching sensitivity. The sensor can be adjusted in the range from 100 to 16000 dpi in increments of 50. The program allows you to set up to five values so that you can choose between them one after another.

Various combinations of settings can be recorded in separate profiles and switch between them with one click. The built-in memory allows you to place up to three such profiles directly on the mouse itself, and then, if necessary, change them, even if you had to connect the gadget to another computer.

After the HyperX Pulsefire FPS Pro Review, we can confidently tell that Pulsefire FPS Pro perfectly fits itself in any situation. Games, work programs, just a long stay behind the screen – in each case, the gadget demonstrates its strengths. People with short hands might have problems working with it but with a couple of days of usage, they can adjust to it.

The Omron switches and the advanced Pixart PMW3389 sensor makes it the FPS gaming beast. With additional grip and rubberized scroll wheel adds comfort for the long usage. And the additional HyperX NGenuity Software gives you the ultimate control of the mouse.

And if you are looking for a companion for the HyperX Pulsefire FPS Pro. We recommend you checking our HyperX Alloy FPS Pro Keybaord Review.