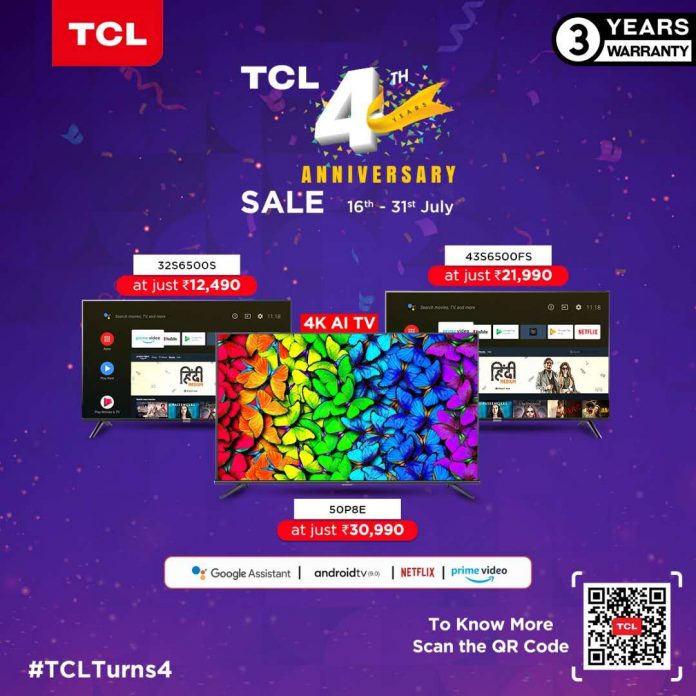 TCL is conducting a sale on the event of its 4th anniversary celebration in India. Globally, TCL turns 39 this year and the brand ranks No.2 in the U.S. in terms of LED TV market share. Recently, it commenced operations for its first self-owned panel factory in Tirupathi, India and pushing the goal of “Make in India” – brand’s largest factory overseas.

The sale will be running between 16thto 31st July and will be applicable to the below mentioned products:

TCL S6500 Series FHD AI Smart TV (43”): Similarly, the 43”S6500 Series comes with additional features such as Micro-dimming and HDR 10 along with Dolby audio for an immersive listening experience.  The android device comes in three OSD languages – English, Spanish, and Portuguese. With a mere 75W power consumption even when the TV is running, the device is highly energy efficient. This anniversary,get the product priced at 21,990 after the discount.

TCL 4K Ultra HD Android LED TV (50”): The 2019 model has a 4K Ultra HD resolution and comes along with a gaming console, three HDMI ports, Blu Ray players, and 2 USB ports. The TV also contains anChromecast Built-in, Google assistant and has an 18-month warranty. The device is priced at 30,990 after the special anniversary discount.

Speaking on the anniversary sale, Mike Chen, General Manager TCL India said, “We are delighted to have completed four successful years in India. We are grateful and thankful for theIndian customers who have accompanied our growth along the way. As a way to thank our prized customers, we hope this initiative will benefit more people with our products at an affordable price, and we will continue our journey together with Indian customers in the future.”